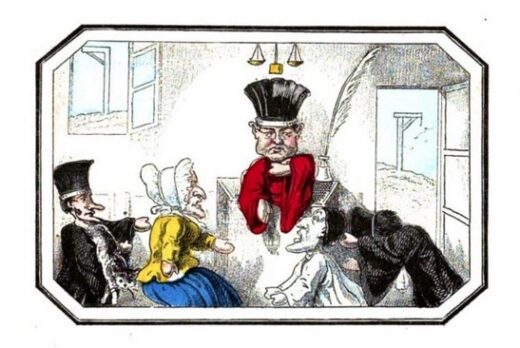 It is not possible to say with certainty whether the play was actually performed in the puppet theatre opened by Duranty in the Tuileries Gardens. The play borrows from comedy the satire of justice and the parody of trials in which the little people, although innocent, are always punished. In a fast-paced tempo, the chases and blows of the baton bring the play back to the traditional repertoire for the glove puppet.

Two hungry lawyers are looking for clients by all means. One would like to urge Pierrot, the other Mme Bégriche to sue anyone under any pretext. But they refuse, flee and then hit the lawyers. The two lawyers join forces to create a dispute: one kills Pierrot's cat and accuses Mme Bégriche of the crime, while the other kills Mme Bégriche's parrot and blames the cat. Dragged to court by their lawyers, the two plaintiffs, victims of the Commissaire's stupidity, were sentenced to be hanged. But they escape without paying any fees and beat up the lawyers who are chasing them. The two lawyers blame each other for this failure and fight to death.