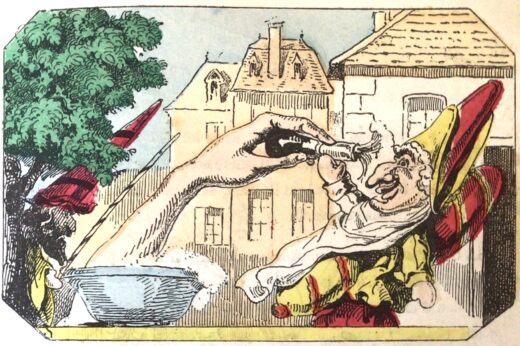 Published by Duranty in his edition of the Théâtre de marionnettes du Jardin des Tuileries, La Grand'main was probably performed on the puppet theatre designed by the author in The Jardin des Tuileries in Paris, but we cannot say for sure. The play is based on a simple situation: Polichinelle, starving, stole another's wine and ham. But events took a fantastic turn with the appearance of a giant red hand coming to punish Polichinelle for his crime. In this play, the puppeteer master was challenged to keep up with the liveliness of movement and tempo written in Duranty's didascalies as Polichinelle had to face the puppeteer's hand (perhaps painted red, perhaps gloved) as well as his nose (more briefly). Duranty introduced here two important innovations in the art of puppetry. The disappearance of the puppet in favour of the human hand, sometimes acting alone and endowed with expressive power, sometimes manipulating an accessory (a towel, a fork, etc.), prefigured the artistic experiments of the Russian Sergei Obraztsov and the Frenchman Yves Joly who, at the beginning of the 20th century, wished to bring the puppet back to its purity. With the appearance of the puppeteer's nose in the show, the puppeteer's body was brought into play on sight, which would become a characteristic of the late 20th century puppetry.

Polichinelle stole a wizard's picnic and beat him up. The wizard made a giant hand appear. Chased by the hand, Polichinelle runned into an old woman's house. To get him out, the Hand trapped him with a smelly pâté. Feigning repentance, Polichinelle asked the wizard to free him from the Hand, then killed him and tried to control the Hand. But it threatened him with a pitchfork and carried him away like the Devil would do.